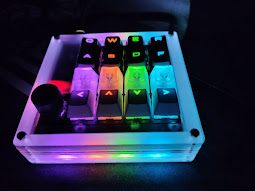 For the next SVT Dumbpad iteration, I was exploring to add per-key RGB to the 4x4 keys. Here is how it all started.

While doing some research on what LED are commonly used for per-key keyboards, I found this page on Hackaday new-part-day-sk6812-mini-e introducing this new part called SK6812-mini E. This part is unique as it is a surface mounted parts but half of it goes into the PCB cut-outs.

The timing was perfect as this part (SK6812-mini e) was available from Lazada at a much cheaper price than previously publish at almost 67% lower. I order them and quickly cut the square holes and soldered them once they arrived.

Thanks for a few other open source keyboard designs, I figured out how to make the cut-out for the footprint for this special parts. As the part is soldered from the back of the PCB but the LED is front facing, I m really really afraid to screw up the pinout. I had to label them clearly ( DI and DO ).

After adding the per-key LED with cut-out holes, I do not I have not enough space for the 4 LED WS2812B LED strips and had to re-position all the diodes and use actual WS2812B surface mount parts instead. I only have areas on the top and bottom part of the PCB for the WS2812B LED for the underglow LED.

As I have NOT added so many LEDs ( 16 + 8 ) to the keyboard before, I was a little nervous about the 5V power consumptions  and add a three way solder bridge to be able to choose between underglow LED, per-key LED or both of them together. To use back the same SVT Dumbpad  firmware, I wire the four LEDs similar as the underglow so I have six parallel LEDs, four facing the top ( per-key LED ) and two facing the bottom (underglow).

The rest of the keyboard remain unchanged but I enlarged the solder pads of the diodes for easy hand soldering. Once the design was done, I usually waited a few more days just in case I think of last minute fixes or new features to add.

Once the PCB arrived, I quickly soldered those per-key LED first without even soldering the rest of the keyboard components. I just use mini grabbers and ran Arduino FastLED to test those LEDs to ensure all the 16 + 8 LED is working fine. 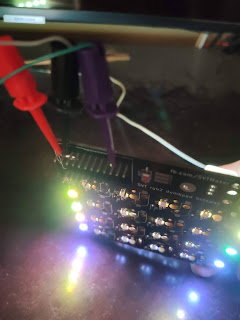 I spend so much time focusing on the SK6812 footprint I neglect the footprint for WS2812B that I have used in my previous product before. It turns out the silkscreen was flipped 180 degree but luckily the wiring was correct, so I de-soldered all the 8 WS2812B and re-solder them 180 degree flipped.

As I also ordered some frosted acrylic, it looks really good on the new per-key RGB LED with diffused RGB lights coming out from the side and bottom. 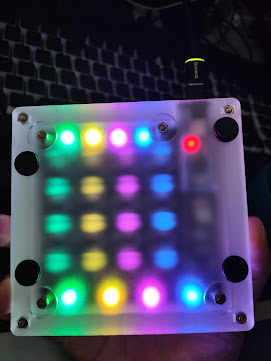 Below are some video on the SVT RGB2 Dumbpad keyboard.