Building a 4x4 mechanical keyboard with RGB and rotary encoder

While browsing the local fb mechanical keyboard group, one member was doing a group buy on an interesting qmk firmware numpad called dumbpad from imchipwood. I always wanted a programmable numeric pad and a rotary encoder for multi function use.

After doing some searching and looking at the nice pictures of this numpad, I decided to make my own version by forking the dumbpad. Unfortunately, it was designed in EagleCAD, a PCB design software I used to use long ago but switched over to KiCAD for most of my recent PCB designs.
With the KiCAD import tool, I imported the entire design to Kicad and start my journey in designing this simple keyboard.
Here are some initial enhancements I planned add to this 4x4 keyboard :-
The decision for using SMD components was so that I can send the entire keyboard for a PCB assembly services where you order all your components and PCB and the factory will do everything and send you back the completed PCB with all the components fully soldered. Another reason was because, once you go surface mount devices (SMD), you will NEVER go back to Through-Hole (TH) parts.
As I researched further, I noticed, without a top plates, the cherry mx style switches will need a 5-pins version for stability instead of the more commonly available 3-pins switch version sold locally. Most keyboard have a plate for stability and take some of the stress from the pressing force. Read more here on why use a plate.
I also added 3D models in KiCAD of the Cherry-MX switch and EC11 rotary encoder for matching the holes and visualizing the dimensions.

Back to the drawing board, I made more and more changes, the only thing remain the same as the original was probably the position of the switch. I also added the 2 x RGB LED Strips using WS2812 LED strips. 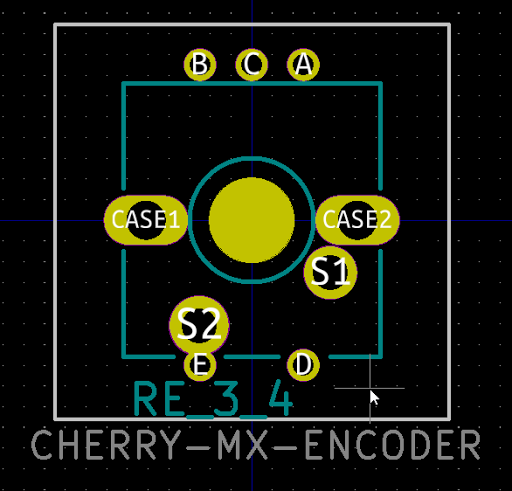 I edited all the footprints and made it bigger for all the soldering pads. The above is a cherry-mx + rotary combo switch.

Once I made the top PCB plates, more design changes are needed :-

Had to go research on various PCB face plates design from 40percent.club and reading various post on different types of design for this.

I finalized with this design and added more mounting point in case I need support from the PCB to the top plates. The Pro Micro, the micro-controller used in this design was swapped to the bottom and all the pins were swapped. I had to re-route everything again.
Just had enough space for two RGB LED strips with 4 x WS2812 each in between middle and bottom row.
I also added an jumper option for the 3rd LED to choose between LED or underglow RGB.
So far, it all schematics and PCB design without knowing will the QMK software even will work with the RGB LED underglow I just added.
Once the PCB was done, I have to do those boring stuff like ordering SMD parts ( 1N4148, Arduino Pro Micro, EC11 Rotary Encoder , knobs and other parts )
I check and re-check several times and held my breath and sent both the PCBs to the Seeed Studio Fusion Services
In summary here are the enhancements I have added to the original dumbpad :-
Continue in Part 2 once I received back the PCB and started coding the SVT RGB dumbpad on QMK firmware